Journal of Management Research and Analysis (JMRA) open access, peer-reviewed quarterly journal publishing since 2014 and is published under auspices of the Innovative Education and Scientific Research Foundation (IESRF), aim to uplift researchers, scholars, academicians, and professionals in all academic and scientific disciplines. IESRF is dedicated to the transfer of technology and research by publishing scientific journals, research content, providing professional’s membership, and conducting conferences, seminars, and award programs.

Principal and Research Guide in Economics

Food is fundamental to human survival and it appears to be the first item of the family budget allocation of all irrespective of class to which they belong. Kerala ranks top among the major States of India in the MPCE on food in the post liberalized era. A perusal of NSS data exhibits that, MPCE of urban Kerala is ahead of the rural for the last few decades, however, a sharp decline is noted in the last decade (2001-2011). Along with an increase in MPCE on food, an increase in food diversity is being expected. The study probe into the extent of food diversity among different income strata of urban Kerala with the unit-level data from NSS 68th consumer expenditure survey. The findings indicate that the share of expenditure on cereal in total food expenditure is high in the low-income class and low in the high-income group. The state of Kerala has high food diversity across all income classes signals a better diet quality of people. It is revealed that food diversity is low in the high and low-income groups compared to middle-income group.

Food is the main item of the family budget across all income strata, especially for the poor. It is very basic to the physiological and emotional wellbeing of all, irrespective of the classes to which it belongs. Yet, there exists a wide disparity in the expenditure on food and quantity consumed among different rural and urban income strata, especially in less developed economies. Diet pattern across the world shows that as income increases people tend to maximize their intake of nutrients by spending more on easily available staples (Banerjee and Duflo, 2011).1 As people get richer, they diversify their diet after a baseline expenditure on cereals (Santhosh, 2019).2 To have diverse types of food is an internationally recommended protocol for a healthy diet. Food diversity refers to an increase in the variety of foods across and within food groups (WHO/FAO, 1996) capable of ensuring adequate intake of essential nutrients that can promote good health (Ruel, 2002).3 Since no single food can contain all nutrients, Labadarios, et al. (2011) noted that the more food groups included in daily diet the greater the likelihood of meeting nutrient requirements. With that background, Kennedy, et al.4 (2009) argued that a sufficiently diverse diet may reflect nutrient adequacy. Moreover, food diversity can be viewed as a proxy measure of food security (Hoddinott, 2002).5

A society's food consumption pattern, in general, is shaped and reshaped by a complex set of socio-economic, demographic, physiological, psychological and environmental factors with inbuilt spatial and interpersonal variations (Morrison, et al, 2011; Karunakaran. N, 20136 and Karunakaran. N, 2014).7 However, among them, lifestyle changes driven by urbanization and augmented disposable income have been identified as the two key factors contributing immenselyto a change in diet pattern across the world (Kennedy, et al.,6 2004). Kerala, one of the leading states in Monthly Percapita Consumption Expenditure (MPCE) has registered impressive growth in the MPCE on food and non-food items both absolute and real terms during the post liberalized regime4 (Baiju, 2002, Santhosh, 2013).8 Kerala also exhibits an increasing trend of MPCE of urban over rural for 40 (1961-2012) years however a sharp decline is noted in the last decade (2001-2011).9 Along with an increase in MPCE on food an increase in food diversity is being expected in the state.India has experienced both incomes induced diet diversification and diet globalization on account of economic growth, urbanization and globalization (Pingali, 2012). It is evident from the declining share of cereal consumption across income strata in India over the years. The triple burden of malnutrition remains a significant concern with the high prevalence of undernutrition, widespread micronutrient deficiencies, and rising obesity despite this dietary transition (Santhosh, 2013).10 At the same time, Kerala has witnessed a drastic reduction in the consumption of cereals which has its bearing on the food diversity of Keralites. An observation of NSS data on urban food consumptionpatterns shows that expenditure on food is increasing in real terms whereas the rate of growth in calorie intake not incommensurate with the rate of growth of expenditure. In this context, this paper attempts to understand the dietary habits of Keralites across different income strata in urban areas of Kerala based on NSS 68th round of consumer expenditure surveys.

The study is based on secondary data. The vital data source is the unit level NSS 68thround of consumer expenditure survey. The survey covers expenditure on food and non-food items incurred by the households. The technique of Fractile group analysis is used for the in-depth analysis of food consumption patterns across different income strata. F1 is called bottom fractile (Lowest 5 percent of the population) and F12 (the top 5 percent of the population) is termed top fractile. Food diversity is the average number of food items consumed by a household out of the total number of food items in a reference period of one month. The unit level data for the construction of food diversity indices is used. Food diversity is estimated by using (i) Herfindahl-Index, (ii) Simpson Index and (iii) Entropie Index.

Where i= 1, 2…. n, n is the total number of food items, and w denotes the share of expenditure on the ith food item. HI measures diversity inversely proportional, i.e., the higher its value, the lower is its diversity.

It is closely related to the HI index. The Simpson index has been applied in empirical economic studies to investigate food diversity. It measures diversity proportional, i.e., high values indicate high diversity within the totality of items.

Concerning food diversity, EI measures diversity by weighting consumption shares of each food with the reciprocal of the logarithmical share.

The estimates of average MPCE for income strata and the percentage allocation of expenditure on each broad group of food items in the urban area and diversity in food consumption among different income strata (fractile) of Kerala in urban areas are analysed.

3.1. Estimation of average MPCE and percentage allocation of expenditure on each broad group of food items

hows, inequality in consumption expenditure in terms of average MPCE in rural Kerala. 11, 12, 4, 13 The estimated average MPCE of the bottom group (first fractile) is only Rs. 687 and that of the top group (12th fractile) of population is Rs. 6424. There exist a wide disparity in the expenditure on food that MPCE on the food of the top group is 9 times of the poor. Hence, it is very essential to understand the diversity of food consumption in each income strata since a balanced diet is critical for leading a healthy life

Distribution of expenditure on each broad group of food items acrossfractile classes in Kerala, (Urban) 2011-12

[i] Source: Estimated from NSS CES for 68th round unit-level data

Table 3 Shows the distribution of expenditure on each broad group of food items by 12 fractile classes in urban ares of Kerala. It is obvious that as income increases people diversify their budget by reducing the consumption of cereals and that the bottom 5 percent of the population allocate 19.1 percentage of their food expenditure for the purchase of cereals; while the top 5 percent spend only 12.2 percentage. Moreover, the share of expenditure on meat, 2, 14, 1, 15, 16 egg and fish is almost similar for all income classes in urban areas. This might be due to Keralites preference towards animal source food irrespective of the classes. It could be observed from the table that the high-income group consumes more milk and milk products than the low-income group. It is also interesting to note that in the case of served processed food, the 12th fractile group spend roughly 25 percent of their food expenditure on served processed food, packaged processed food and beverages. It is a fact that there is widespread intraclass inequality in the expenditure on various broad groups of food items. Hence, it calls for an analysis of the diversity of food consumption among different income strata in the urban area to investigate whether people follow a balanced diet

Diversity in food consumption among urban income strata of Kerala:

The value of Herfindahl, Simpson and Entropie index for the 12 income groups (fractile) is given in Table 3. The line graph is given separately for three indices (Figure 1, Figure 2, Figure 3) for comparing diversity between fractiles. It is interesting to note that all indicators are showing diversity in food consumption in the middle-income group compared to the high and low-income groups. This is due to food concertation among richer classes mainly towards animal source food, packaged processed food and beverages. Furthermore, the low-income group concentrated their food consumption toward cereals, served processed. The diet diversification towards served processed food, packaged processed food and beverages in urban areas may have serious health implications since these items are costlier causes the cost of calorie intake to soar. Moreover, the westernization diet in the urban areas of Kerala leads to diet-related diseases. 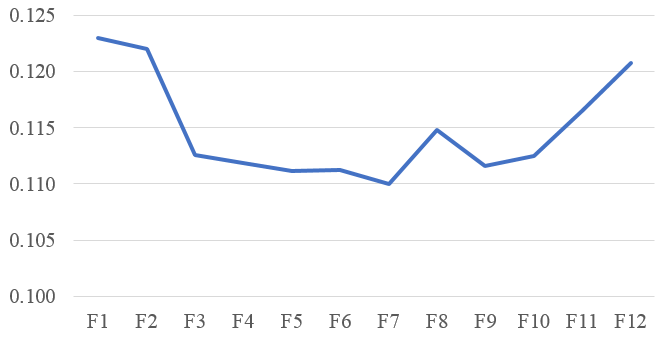 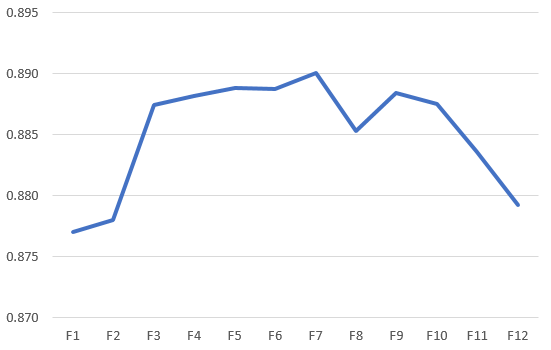 It is because the rich group is concentrating their expenditure in broad food groups like egg, meat and fish and also in the processed groups. At the same time, the poor concentrated on cereals consumption.10, 17 It is a signal of increasing food diversity among the poor. Simpson index also depicts the same trend that food diversity is comparatively low among the top and low-income group when compared to the middle-income group as the rich is concentrating more on egg, fish and meats and also on processed food while the poor are concentrated on the cereals and processed food (Figure 2). Entropie index also exhibits the same trend.

The analysis confirms the declining share of cereal consumption in total food consumption as income increases. Concerning the food diversity, the middle-income groupis enjoying diversified food compared to the low and high-income groups in urban areas of Kerala. It is found that high-income groups prefer more served processed food, packaged processed food and beverages which then leads to food concentration. It signals the cause of declining calorie intake, micronutrient deficiencies and emergence of diet-related diseases in India on account of dietary transition. It is also revealed that Kerala’s dietary pattern is unique in India as all income group satisfies high-level food diversity, a measure of diet quality. However, the declining food diversity for the high and low-income group is a worrisome factor, which is paradoxical to the conventional belief that an increase in income promotes a balanced diet.

N Karunakaran Projected demand for rice in Kerala up to 2026 AD”,Agricultural Situation India2014711215

A Banerjee Poor Economics:Rethinking poverty and the ways to end it2011464

L Drescher Healthy food diversity as a concept of dietary quality: Measurement, determinants of consumer demand, and willingness to pay200719https://cuvillier.de/uploads/preview/public_file/3692/9783867273008.pdf

Who/Fao Preparation and use of food-based dietary guidelinesUnited Nations1996108