Journal of Management Research and Analysis (JMRA) open access, peer-reviewed quarterly journal publishing since 2014 and is published under auspices of the Innovative Education and Scientific Research Foundation (IESRF), aim to uplift researchers, scholars, academicians, and professionals in all academic and scientific disciplines. IESRF is dedicated to the transfer of technology and research by publishing scientific journals, research content, providing professional’s membership, and conducting conferences, seminars, and award programs.

Thomas and Karunakaran: Direction of India’s rice exports in the post-Iiberalization era

Direction of India’s rice exports in the post-Iiberalization era

Principal and Research Guide in Economics

Rice continues to play an important role in the national exports of India. It accounts for 2.1 percent of India’s overall export earnings and accounted for 18.3 percent of agriculture and allied products exports. India ranks first in the export of rice in the world. The increased demand for rice on the world market is providing a magnificent environment for this. The country observed remarkable increase after the new economic policy. The present study attempted to examine the pattern of growth, structure, instability and concentration of India’s rice exports to different destinations.

In the Indian economy, agriculture is the most significant sector. It is the oldest and largest occupation, and is also the backbone of the economy. It is one of the most important economic sectors, especially in rural areas (Ramakrishna B and Chaya K Degaonkar, 2016).1, 2, 3, 4, 5, 6, 7, 8, 9, 10 19.9 percent of India's GDP in 2020-21 is from agriculture and employs more than half of the country's workforce. Even after more than seven decades of independence, the economy remains largely an agrarian in terms of population dependence and labour force participation. Rice is one of India's most important food crops. It provides food for more than half of the world's population. Most people in South-East Asia eat it as their primary source of nutrition. Asia accounts for about 90 percent of the world's rice area and production. There are many different varieties of rice in India (Karunakaran N, 2013).4, 5, 1

Among rice growing countries, India having the largest area under rice in the world and in case of production it is next to China. Rice contributes 42 percent of total food grains production and 45 percent of cereal production in the country. West Bengal, Odisha, Andra Pradesh, Tamil Nadu and Bihar are the major cultivators and which together constitute over 80 percent of the rice production in India. The production of rice was increased from 74.3 million tons in 1990-91 to 120 million tons in 2020-21. Most of this increase was the result of an increase in yields. India is the world's leading rice exporter, followed by Thailand and Vietnam. On the global market, Indian rice is in high demand. The increased demand for rice on the global market is creating a favourable atmosphere for Indian rice exports. Indian agriculture made a significant contribution to world food production, with rice having the biggest percentage of export value among agricultural products (Karunakaran N, 2013).5 India has been a significant exporter of rice since the early 80’s, but the country has observed a remarkable increase only after the implementation of new economic policy (Kumar M, 2019).7

The study used time series data on export value of rice from India during the period of 1991-92 to 2019-20. For analysis of direction of rice exports, six major importing countries were considered namely, Saudi Arabia, UAE, Kuwait, USA, Bangladesh and Yemen. Secondary data were collected from DGCIS, various issues of handbook on Statistics of Indian economy by RBI, and the Economic Surveys of government of India. Compound growth rate, Coppok’s Instability Index and Gini-Hirschman Index of geographical concentration were used for analysis.

The compound growth rate (CGR) is calculated by using the formula:

Where, Yt = Value of rice exports in year t, a = constant, t = time element in year, b = regression coefficient which shows the rate of change or growth rate.

Instability in export earnings was estimated by using Coppok’s Instability Index (CII); the CII with higher numerical value represents, higher instability and vice versa. It is calculated as the antilog of the square root of logarithmic variance using the formula:

Where, Xit shows the export value rice to country i in year t and Xt shows the total rice export of the year t. 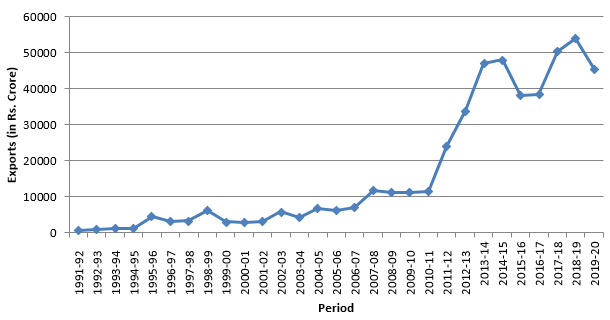 India exports rice to numerous countries around the world, in 2019-20 to 234 countries. There was a structural change in the direction and magnitude of rice exports recently. To analyze the direction and growth performance of India’s rice exports, six major destinations (Saudi Arabia, UAE, Kuwait, USA, Yemen and Bangladesh) were considered. The major destinations and their share during the period of 1991-92 to 2019-20 from India are presented in (Table 1).

It is seen that Bangladesh and Yemen were the more unstable markets and Kuwait and Saudi Arabia were the more stable markets for exports of India’s rice during the period under study. During 1991-92 to 2019-20, Bangladesh experienced the high instability and least growth in its market share of India’s rice exports. Saudi Arabia was the largest importer of rice from India and has moderate amount of growth rate and the lowest degree of instability in rice exports (Figure 2).

There had been a noticeable change in the direction and volume of rice exports of India. Among the major importers of rice, Saudi Arabia was the largest one and had a moderate amount of compound growth rate and lowest degree of instability. The degree of market concentration of India’s rice export has been declining and diversification has increased over the years. The lowest degree of concentration was in 2012-13 and the highest in 1993-94.

B Pinky An analysis of Direction of Rice Exports from India: Performance and Concentration”J Econ Policy Res2019142213

Handbook of Statistics on Indian Economy2021https://www.indiabudget.gov.in/economicsurvey/